Jonathan first picked up a coach horn at the age of 5. He played the trumpet at the age of 8 and by 12 was playing the French horn. His mother was his driving force, as she would encourage him to listen to classical music from a very young age and to become a member of every local orchestra. Growing up in a rural area, Jonathan was fortunate to have the opportunity to study with Peter Kane (Bournemouth Sinfonietta) and Richard Thomas (Bournemouth Symphony Orchestra).

Jonathan studied at the Royal Academy of Music in London with Professor James Brown. During this time he played principal horn with the European Youth Orchestra with Claudio Abbado and Daniel Barenboim, and the Snape Maltings Training Orchestra with Hugh Maguire. Before leaving for Portugal, professional experience included playing with the City of Birmingham Symphony Orchestra, Opera North, Orchestra of the Royal Ballet, Cambridge Opera Group, recording with the BBC, among others.

At the age of 24 Jonathan accepted the position of principal horn in the Gulbenkian Orchestra, Lisbon, Portugal.

As a soloist he performed the Mozart Horn Concertos No. 2, 3 and 4, Strauss Horn Concertos No. 1 and 2, Britten’s Serenade for tenor, horn & strings, Schumann Konzertstück for 4 horns, among others. Jonathan had the honour of performing the Penderecki Horn Concerto, under the direction of the composer himself.

The orchestra toured frequently, and Jonathan travelled with them to Japan, India, China, Thailand, USA, Brazil, Argentina, Armenia and across Europe. He also had the opportunity to play with other orchestras and music ensembles in many of those countries, such as Montepulciano and Spoleto Festivals – Italy, Oficina de Música de Curitiba – Brazil, Recital Soloist – Morocco, Spain and France, and the Chamber Orchestra of Europe – Portugal.

Under the direction of conductors such as Gustavo Dudamel, Esa Pekka Salonen, Jukka-Pekka Saraste, Lawrence Foster, Simone Young, Thomas Helgenbrock, John Nelson and Richard Hickox, Jonathan established himself with the Gulbenkian Orchestra, and played and recorded with them for 31 years. During this time he was also a member of the Amadeus Wind Quintet, Hot Brass of Portugal, and Tejo Horns.

A great part of Jonathan’s passion has always been to inspire and mentor other musicians at all levels. On leaving the Royal Academy of Music, Jonathan took teaching posts at the Kent Music School, Brighton College and Cheam School, teaching brass.

In Portugal, he taught the French horn at the Lisbon University of Music (ESML), Évora University and Évora Academy. He enjoyed teaching masterclasses in Brazil and around Portugal, where many of his former students would invite him to tutor on various subjects such as sound production, intonation, rhythm, musical interpretation and how to play in an orchestral section. 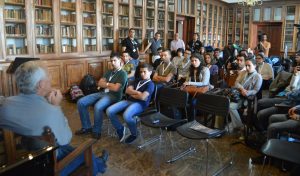 Jonathan has left a legacy of horn players and teachers in Portugal. Many of his students are now playing in leading orchestras across Europe, such as Orquestra Sinfónica Portuguesa, Orquestra Sinfónica do Porto, Opéra de Marseille, Darmstadt, Orquesta Clásica Santa Cecilia, among others.

He has been named alongside Bohdan Sebestik as one of the most influencial French horn players and teachers in Portugal.

Now based in Ireland, Jonathan continues to teach French horn players, is involved in musical projects in the greater Limerick area, is the musical director for St. John’s Brass and Reed Band in Limerick, and teaches brass at the Munster Music Academy in Killaloe.

Jonathan has dedicated his life to music. He is a firm believer that music should be accessible to everyone.

During his time with the Gulbenkian Orchestra, Jonathan had the privilege of witnessing the collaboration between the Gulbenkian and the Orquestra Geração – a musical project inspired by the Simón Bolívar Orchestra of Venezuela. These types of projects take music into inner cities to less advantaged children who don’t have the opportunity to play and study an instrument. This experience helps the students to develop self-confidence, a sense of responsibility and teamwork, and learn to express themselves freely through music.

“Music should be inclusive, not exclusive. Every child regardless of wealth or standing should have an opportunity to study an instrument. My education was in the state school system in England, where music was a big part of the curriculum in those days. Later at secondary school, peripatetic teachers would come in and teach individual music lessons. This is no longer happening, and music is no longer considered to be important. It is incredibly sad to see music become an elitist subject that is no longer open to everyone.”

Since retiring from the Gulbenkian Orchestra in Portugal, in addition to teaching musical education and giving masterclasses for French horn, Jonathan has become involved in many community musical projects for both adults and children. He has conducted community choirs and amateur orchestras, and directed amateur productions of Gilbert & Sullivan operas and more recently a Stephen Sondheim musical.

More recently, in Limerick, Ireland, Jonathan who is now the Musical Director of the historic St. John’s Brass and Reed Band, has been working on a pilot scheme with the Garryowen Community Development Project, to take music into local schools and to the wider Garryowen community.  The aim is to help disadvantaged community members have access to a musical opportunity in the form of learning an instrument, joining a choir or other musical activities.